The writers and photographers whose work has been included in the three Paperback L.A. books are always in the news. We can’t keep up. We kind of try but we’re a day late with our July update. So if you want to take advantage of our breaking news (item #1) better hurry on over to Beverly Hills right now. If it isn’t today any more, relax and enjoy the gossip and links.

Tonight, the The Paley Center for Media in Beverly Hills is hosting a screening and panel discussion of the Season 2 premiere of Lodge 49, the AMC TV show created by Jim Gavin, and starring Wyatt Russell, Brent Jennings, and Sonya Cassidy. The show shares a teeny bit of DNA with Gavin’s short story “Middle Men” which was excerpted in Paperback L.A. Book 2. Here’s the trailer (yes, that’s Cheech Marin): 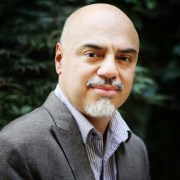 Still on newsstands (if you can find one): Hector Tobar’s essay “The Assassin Next Door,” in the July 29 issue of The New Yorker, focusing on “an unglamorous corner of East Hollywood.” We included a passage from Tobar’s The Barbarian Nurseries focusing on another unglamorous neighborhood on L.A. in Paperback L.A. Book 1.

Landau also contributed a street-scene photo essay, “L.A. Obscura,” to that book. Landau, a widely published editorial photographer, is perhaps best known for his photos of Sunset Strip billboards, which have been featured in several exhibitions and collected in the book Rock ‘N’ Roll Billboards of the Sunset Strip. He’s also a featured player in the cast of the 40-year-long L.A. history-mystery of Paul McCartney’s head, which was amusingly detailed by Victoria Bernal on KCRW’s blog in July.

Our favorite food story of the season is  an op-ed called “Five Myths Regarding Barbecue” by Jim Auchmutely, which we spotted in the Henderson N.C. Times-News online site, BlueRidge Now.  We were gratified that Auchmutely, author of Smokelore: A Short History of Barbecue in America, says the dawn of backyard cooking “took place not in the barbecue homeland of the South but in California,” when Sunset magazine, “inspired by Mexican ranchero cooking,” suggested its readers build brick barbecue pits. And we have to admit that his shaming of mid-20th century cookbook authors including our Paperback L.A. Book 2 contributor, Helen Evans Brown, is justified– for promulgating Myth No. 4, that outdoor cooking is man’s work.

In her “New Generation” column for PHmuseum,  a curated platform dedicated to contemporary photography,  Lucia de Stefani describes a new photo series “Borderlands,” by Kovi Konowiecki, the Long Beach-based photographer whose photo essay “Hometown Gold” appears in Paperback L.A. Book 3. Stefani describes how the series “explores the geographical and emotional margins of society and the mind.”

As summer list season began, Document contributor (writer/critic/agent/editor) Ira Silverberg made a list of outstanding prose works by poets that included Paul Beatty, who, says Silverberg, “emerged from the Slam Poetry scene in the 1990’s to become one of the funnier poets riffing on class and race in the US. ” Silverberg cites Beatty’s Booker Award-winning novel, The Sellout, which was excerpted in Paperback L.A. Book 1.

Paperback L.A. Book 3 contributor Harry Shearer was a longtime commentator on his hometown L.A. before relocating to New Orleans, where he is now a voice on local issues and known for his 2010 “The Big Uneasy,” an award-winning documentary on Hurricane Katrina and the flooding of New Orleans. Just after 2019’s Hurricane Barry a few weeks ago, Shearer filed an op-ed on The Lens, a NOLA investigative reporting site, offering a roadmap for future hurricane prevention that doesn’t include the Army Corps of Engineers.